The Oslo Opera House of Oslo 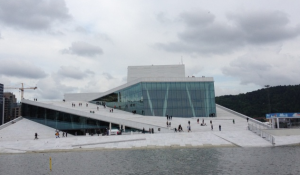 The Oslo Opera House building (Norwegian: Operahuset or Den Norske Opera & Ballett) is an architectural achievement and has turned out to become one of Oslo’s most visited attractions.

The opera building is the home of the Norwegian National Opera and Ballet, and the national opera theatre in Norway. The building is situated in the Bjørvika neighborhood of central Oslo, at the head of the Oslofjord.

The Oslo Opera is operated by Statsbygg, the government agency which manages property for the Norwegian government. The structure contains 1,100 rooms in a total area of 38,500 m2 (414,000 sq ft). The main auditorium seats 1,364 seats and two other performance spaces that can seat 200 and 400. The building is diveded in to three houses. The Main House (1369 seats), Second House (400 seats) and the Studio (200 seats). Very often though concerts are also arranged on the roof of the building.

The angled exterior surfaces of the building are covered with Italian marble and white granite and make it appear to rise from the water.

The opera house building is also the largest cultural building constructed in Norway since Nidarosdomen was completed circa 1300.

Reviews – Add yours too Cancel reply

This site uses Akismet to reduce spam. Learn how your comment data is processed.

Listing Owner
Founder of "Where in Oslo".